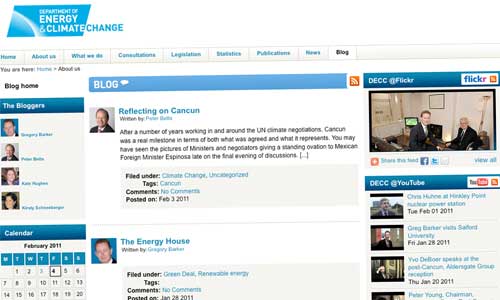 Congratulations to the Department of Energy and Climate Change on the launch of their new staff blogs platform; and particular congratulations for choosing the right software to power them. 🙂
Like other Whitehall blogging initiatives such as those at DFID and FCO (both of whom already have their own group blogs on climate change – here and here respectively), the DECC site sets out to give readers an insight on staff’s day-to-day activity. Four bloggers kick things off: one Minister, Conservative Gregory Barker; and three (relatively senior) staff members.
On a technical level, it’s not dissimilar to the work I did for DFID, in that although the four contributors’ entries are presented as independent, stand-alone blogs, they’re actually just multiple users writing into a single group blog.
The work has been done by DECC’s existing digital agency, the Swansea-based S8080. Like their main corporate site, it’s running on a Microsoft IIS server, which may explain the lack of ‘pretty permalinks’ (although it doesn’t have to be like that). There are a few rough edges, and I hope they won’t mind me saying, they’ve done a few things in not very WordPress-y ways: entirely understandable, since they’re primarily a Microsoft-based company. But hey, it’s early days, and I’m sure it’ll all be ironed out soon enough.
It’s quite a brave initiative on one level: you only have to look at the number of comments typically received by climate-sceptic Telegraph writer James Delingpole – always in the hundreds per post, and often well into the thousands! – to see what they could be letting themselves in for. There’s no explicit comment policy showing on the blog: I only hope they’ve given some thought to how they’ll handle the more confrontational comments they’re likely to receive. DFID’s is a great example to follow, if they need one.
I know both FCO and DFID feel they’ve got a lot out of their blogging platforms: and I sincerely hope DECC have a similarly positive experience. But it may be a bumpy ride. 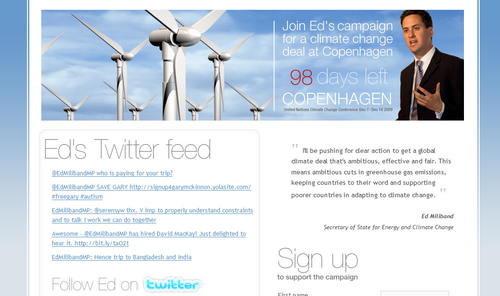 One of the few international set-pieces between now and the next general election is the UN climate change conference in Copenhagen in mid-December. And the UK’s Secretary of State for Energy and Climate Change is trying to drum up support among the population for – er, well, let’s not dwell on details. ‘A deal’ of some kind.
He’s launched a website, EdsPledge.com asking people to declare their support for his campaign, and spread it round their social networks. It’s a pretty modest affair… too modest, arguably. An imported feed from his Twitter account, lots of calls to action – but in terms of substance, only a 67-second YouTube video.
But you’ll need to be looking relatively closely to spot that EdsPledge.com (registered at the end of July) is actually a Labour Party website – which, in fact, sits within www.labour.org.uk. The Labour logo is in dead space in the bottom corner of the screen, and the footer text declaring the site’s ownership is light grey text on white. There’s literally zero reference to Labour in that 67 seconds of video – other than the choice of font, and who’s going to notice that? (Well, apart from me.)
Meanwhile, in the gov.uk domain, we have ActOnCopenhagen.gov.uk – proclaiming, would you believe it, ‘the UK Government’s ambition for a global deal on climate change’, a joint DECC/FCO production, hosted by FCO but ultimately using a DECC subdomain. (Hey… Miliband and Miliband. Hadn’t thought of that until now.) And guess what? It too has a clock counting down to the conference, a bit of Twitter and YouTube, and a ‘100 days’ message from Ed Miliband – plus, it has to be said, a lot more detail.
Of course it’s obvious why Labour should be trying to maximise the political potential of Copenhagen. And likewise, it sits perfectly within FCO’s wider public diplomacy remit, as well as the DECC portfolio. Nobody’s doing anything wrong per se, from a selfish perspective anyway. But I can’t help feeling we’re straying into dangerous territory here.
For decades, centuries even, the Civil Service sat as a buffer between politicians and the populace. Mass communication required budgets and infrastructure which the political parties couldn’t readily lay their hands on, or afford. But just as the music and journalism businesses have seen their previously cosy arrangements challenged by the disappearance of those barriers to entry, are we now seeing the politicians challenging the authority of their own departments for their own purposes?
There’s now nothing to stop a minister setting up his/her own website pushing his/her own line – beyond the control of The Department. In many cases, it could be much cheaper and quicker to go outside, rather than rely on the internal processes. And free from Civil Service rules on dispassionate discourse, it might be more effective too.
Now, whilst there could be tension between these two web initiatives, I suspect there won’t be in practice. Wearing my cynical hat, the Labour site seems to have two objectives – visibility for Miliband, and harvesting the contact details of potential Labour sympathisers/voters. There’s no real duplication of functionality or content, nor any inherent clash with the weighty objectives of the DECC/FCO site.
But this is the first time I’ve seen such an obvious attempt by Labour to mirror departmental responsibility; and it’s easy to imagine how other similar activity around other departments’ areas – let’s say Health? Defence? Treasury? wider foreign affairs? – might get a little more juicy. Keep an eye on it, folks.