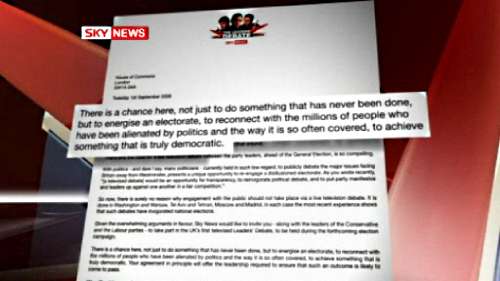 Sky News has launched a high-profile campaign calling on the leaders of the main political parties to commit to a televised debate – or strictly, several – at the next election. They make a compelling case – pointing out that even Afghanistan managed it. Why on earth, in the year of our Lord two thousand and ten, can’t we?
David Cameron responded almost instantly to Sky’s letter; Nick Clegg has also backed the idea in the past few weeks. Then again, of course they would. So ultimately, it all comes down to the Labour response – although Sky don’t seem to be ruling out the ‘tub of lard’ option. 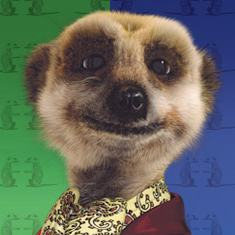 I find it quite remarkable that we’ve made it to 2010 without TV debates becoming part of the British electoral process. How dare they refuse the electorate a neatly packaged opportunity to ‘compare the market’? (Sorry.) It shouldn’t be about whether each leader thinks it’s strategically advantageous to him or her. Doesn’t the electorate have an absolute right to expect those who wish to lead it to come before them, and present their case using the electorate’s preferred communication medium? And isn’t it reasonable, in a world where media profile is all, for those leadership candidates to demonstrate their competence in that regard?
For once, I think it’s in everyone’s strategic interests to have the debate this time round. Cameron’s good on camera. Clegg needs the exposure. And Labour can’t do any worse. Actually, if I were Labour, I’d be saying yes, specifically with a view to the long term. If we have a debate this time, it’ll be nigh-on impossible not to have one at every future election. And whilst it mightn’t actually help Labour on this occasion, they may well be grateful of the opportunity to embarrass Cameron (or whoever) in four or eight years’ time.
But you know what? I almost think the most compelling reason for doing it, is simply to do it. Because it’s never been done before, and it might spark a bit of interest among the disinterested. And because it means we’ll never have to have this argument again.
PS: Do I need to note that Sky might not be launching this campaign this solely out of a belief in the democratic benefits? It’s in their interests to ‘own’ the issue… otherwise the event would undoubtedly go to the BBC. (And probably still will.)