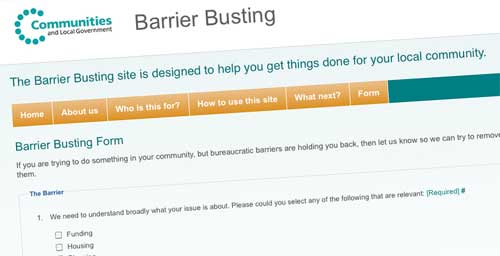 Just a quick post to record that Communities and Local Government have launched what I believe is their first WordPress-based project: Barrier Busting. Based – apparently – on something originally done by BIS, although I don’t immediately recognise it, it’s a fairly modest site built around a one-page survey form, asking people about the ‘bureaucratic barriers’ preventing them doing something in their community.
By the look of it, the form – and the processing code behind it – is hard-coded PHP, dropped into a WordPress custom page template. It’s quite a nice reminder that WordPress itself isn’t the end of the possibilities: by definition, if you’ve got WordPress installed, you’ve got PHP installed, and you can code whatever you like around the standard WordPress theme code. The work has been done by Lancaster-based Netfundi, who have a well-established relationship with DCLG.