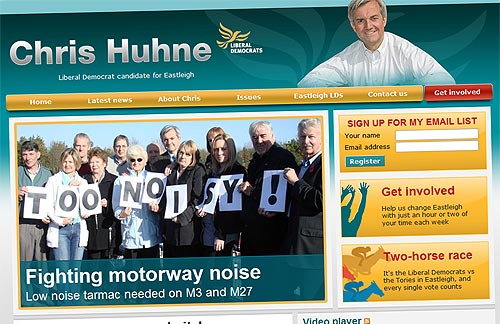 With the election now well and truly underway, it’s high time I blogged about the latest website Puffbox has built for a high-profile Liberal Democrat – this time it’s home affairs spokesman Chris Huhne, as he looks to defend a wafer-thin majority in Eastleigh.
We were approached by Huhne’s team late last year: they’d seen what we’d done for Lynne Featherstone, and wanted us to do something similar for them. We soon ruled out a ‘carbon copy’ site: Lynne’s use of social media is exceptional, and the approach we took with her wasn’t going to be appropriate for Chris. Instead, we’ve shaped the site around Chris’s rather more conventional media output, but with plenty of scope to expand later, if or when required. 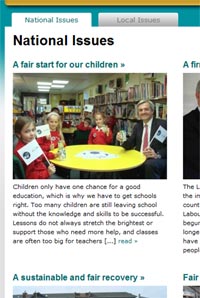 We’ve gone for a high-impact homepage, with a large image carousel highlighting a number of key local issues: and as with Lynne Featherstone’s site, each issue has its own explanatory page which can act as a hub for related posts. Unlike Lynne though, a large proportion of Chris’s work is at national level – so we’ve gone for a tabbed approach, allowing you to switch between national and local issues. (And using cookies, we’ll remember your preference for your next visit.)
Since his election in 2005, Chris had been running a website based on the Prater Raines platform used by the vast majority of Liberal Democrat people and local parties. (It’s actually an excellent technical solution; but it won’t win any design awards.) We’ve managed to bring across the vast majority of the previous site’s content, close to 1,000 pages, by screen-scraping: and whilst the new page addresses aren’t exact matches, they do all work seamlessly.
The site was built on WordPress, with just a little behind-the-scenes help from Simon Wheatley; it was designed in collaboration with Matt Budd of Dunston Graphics. I think he’s done a magnificent job with the LibDems’ somewhat troublesome preference for aqua and yellow.
There are a few areas, in both technical and editorial terms, where I wish we’d had just a little more time; but the declaration of the election forced our hand somewhat. So whilst I’m more than happy with what we’ve already delivered, I think we can make it even better in the months to come. Assuming the voters of Eastleigh give us the chance…