Then came the first instance of Labour breaching the impartiality of government’s communications; we discovered that “Building Britain’s Future”, a brand conceived and promoted by the civil service, is used extensively on the Labour party’s website.

Whitehall comms experts have denied any revolt. Permanent secretary for government communications Matt Tee insisted Building Britain’s Future was a government brand, and said he would ensure it was not used by the Labour Party… ‘I am clear that Building Britain’s Future is a government brand – if we reached a position when someone else used it, I’d have to consider the risk that citizens could be confused about where the messages are coming from.’
Department for Business, Innovation and Skills (BIS) director of comms Russell Grossman said: ‘All civil servants are keen to ensure the line isn’t crossed into political sloganeering. This slogan doesn’t cross that line at all – The Labour Party hasn’t used this.’

Earlier this week, I saw this… the front page of the Labour Party website. And there it is, right up front – ‘Building Britain’s Future’ in large letters, the same logo in the corner. 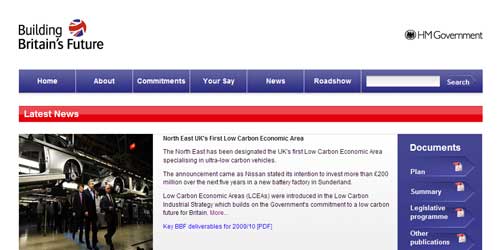