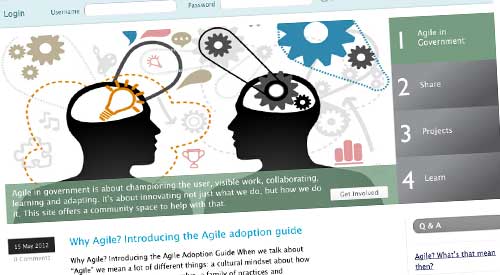 There’s a new website in the civilservice.gov.uk domain – but because it’s at a subdomain, of course, it doesn’t count as a ‘new’ site. (That’s an observation, not a criticism; I’m as guilty of doing this as anyone.)
Created by DWP ‘in their role as leaders of Govt agile adoption on the ICT Strategy CIO Delivery Board’, it’s a community site which sets out to provide a space for ‘people in the public and private sectors to discuss, share and get advice and answers on adopting agile in UK Government projects’. As such, it ticks a box from the ICT Strategy Implementation Plan.
Naturally I’m delighted to see they’ve built it using BuddyPress. It looks like a fairly ‘vanilla’ installation for the moment, running using the free BuddyPress Corporate theme, with minimal customisation. I’ve also spotted the Q&A premium plugin in there too. The IP address reveals it’s the handiwork of Harry Metcalfe’s DXW crew.
They’re doing the right thing by just charging headlong into it; it seems like all the Facebook-esque functionality – personal profiles, groups, forums (?), friending, etc – has been enabled. Some of it will work, some won’t. But since it’s all in there already, you may as well give it a try.
I’d also endorse the decision to work with a ready-made theme: I recently looked into developing a BuddyPress theme from scratch, and soon gave up on the idea. It’s terrifying. If you really want to customise the look & feel, do it as a Child Theme.
The fate of any BuddyPress is dictated by the momentum it builds (or fails to build). The site, or more accurately its membership, needs to provide good enough reason for people to come back regularly, and contribute while they’re there. I wish them well.
We’ve got a BuddyPress-based government project of our own in the works; the development work is close to completion, but we’re facing a few bureaucratic hurdles. I’m hoping for progress in the next couple of weeks; naturally, I’ll blog about it in due course.