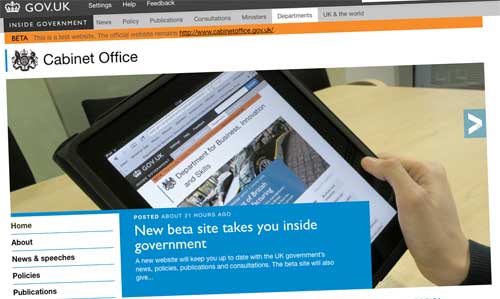 The next phase of the gov.uk beta programme was opened last night: a six-week public testing phase for the ‘Whitehall’ information, now renamed ‘Inside Government‘ (complete with tautological URL). Ten departments are covered initially, including all the obvious online big-hitters such as Health, BIS, Defra, FCO and DFID.
It looks very much like the rest of the gov.uk platform – as you’d expect, with a Global Experience Language – so it feels more like an extension than an enhancement. This is most striking with the individual department ‘subsites’: a unique ‘spot colour’ aside, and with an unexpected exception made for the MOD crest, all look identical and carry the same navigation. Departments aren’t going to recognise these as ‘their’ sites – but that’s kind of the point.
It’s far too early to make definitive judgments about the presentation, not least because the team admit it’s much more unfinished than previous previews. It’s hard, therefore, to decide what’s deliberately minimalist, and what’s just ‘not done yet’ – and therefore, hard to offer helpful criticism. A lot of the pages feel very plain, probably too plain. In particular, I’m not fond of the very ‘boxy’ presentation of many pages: see the main News or Publications pages as good examples. I just don’t find my eye being guided anywhere, and I don’t get any sense of significance. But maybe they just haven’t been ‘done’ yet.
Writing on the GDS blog, Neil Williams describes the ‘custom publishing engine properly tuned to the needs of multiple users and publishers across Whitehall, and built specifically for the kinds of things governments produce. … On average, publishing to GOV.UK was 2.5 minutes faster than WordPress and 11 minutes faster than Directgov,’ he claims: I’ve already taken him to task on that one. 🙂
As a website, it’s what they said it would be, and it looks like we knew it would look. So it doesn’t feel like much of a leap forward, and could actually be quite a tough sell around Whitehall. But this part of the gov.uk project isn’t about a website. It’s about redefining how government departments see themselves, present themselves, and talk about what they do. And that’s w-a-y more difficult than building a website.