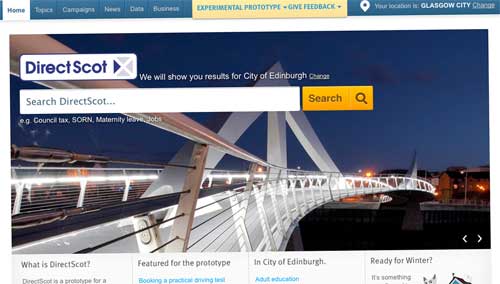 First major government web launch of the year is DirectScot – described by some as the ‘Scottish version of alpha.gov.uk’, although if you dig beneath the service, it’s arguably closer in philosophy to Northern Ireland’s NIDirect.
On its WordPress-powered blog (yay!), DirectScot says its aim is ‘to enable you to find what you are looking for as quickly and easily as possible, based on aggregation of content and powerful, location-based search technology.’ Indeed, it explicitly calls itself a portal, a word Alphagov never used. The development agency behind the site, Edinburgh’s own Storm ID admit as much: their launch announcement is all about search, search, search.
The site highlights a handful of services ‘featured for the prototype’: one of which is Booking a practical driving test. This takes you to a page with an intriguing URL, ending in a DG reference number. Can you guess what DG stands for? And indeed, the five-digit number on the DirectScot site matches the equivalent page ID on its orange neighbour. Scanning down that page on driving tests, you’ll see links to half a dozen other DG-sourced articles, plus a few pointing at dft.gov.uk… none of which, as yet, carry your geographic location across.
The one feature which is properly ‘wired in’ is the application process for a Blue Badge parking permit. A page named DS_0001 ultimately leads you to a DirectScot-branded equivalent of the standard Directgov page… although tellingly, the ‘home’ URL behind the DirectScot logo is, in fact, still www.direct.gov.uk. Ahem.
It’s far too early to make any judgements about the site. The principle of location-tailored information is unquestionably a good thing; and even if this prototype is only a statement of intent in that regard, it’s to be welcomed. It’s quite pretty, and makes a good first step towards responsive design – the process by which a layout adapts according to the available screen size.
But there’s one dark cloud on the horizon: the site looks to have been built using Microsoft technologies, which doesn’t bode well for the site’s code being open-sourced.
Consultation on the site opened today, and closes on 1 March.