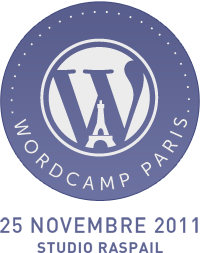 France’s first ‘proper’ WordCamp takes place in Paris in a couple of weeks: and I’ve just bought my ticket.
I did French as part of my degree – although that was nearly two decades ago, and only a tiny part of it was ever computer-related. So I’m placing a lot of confidence in 1) my memory of the language, and 2) the likelihood of the most difficult words being derived from English anyway. 🙂
There’s a reassuring familiarity to the day’s provisional programme: the themes business, scale, security, optimisation, and so on.
But the star attraction, for me anyway, will be the appearance of Michel Valdrighi – the man who created the b2/cafelog blogging platform, and whose sudden disappearance led to a discussion between a kid from Texas and a bloke in Stockport, which ultimately led to… 😉
Also worth noting is the gold-level sponsorship offered by Microsoft. Yes, yet another one.
Alors… est-ce qu’il y en a parmi les lecteurs de ce blogue qui voudraient me rejoindre à Paris? Tickets are a very reasonable €25, and there are still plenty left. Come on, let’s help the neighbours build some momentum.

2 thoughts on “Paris go! Off to France's first WordCamp”