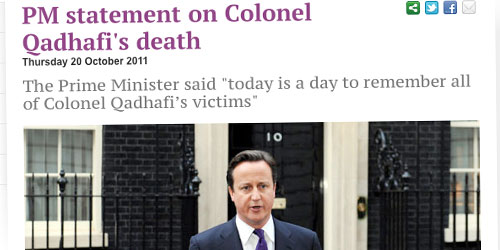 The Downing Street website, redesigned this summer, uses a few fonts from the excellent (and free) Google Fonts service. Among them, the PT Sans and PT Serif fonts. They’re really nice, and I’m considering using them myself on a forthcoming project.
I’ve just discovered their back story via the Google site:

PT Serif™ is the second pan-Cyrillic font family developed for the project “Public Types of the Russian Federation.” The first family of the project, PT Sans, was released in 2009.
The fonts are released with a libre license and can be freely redistributed: The main aim of the project is to give possibility to the people of Russia to read and write in their native languages.
The project is dedicated to the 300 year anniversary of the civil type invented by Peter the Great in 1708–1710. It was given financial support from the Russian Federal Agency for Press and Mass Communications.

The head of the British government relying on a Kremlin-funded project for his typographic needs? It’s like something out of Spooks.