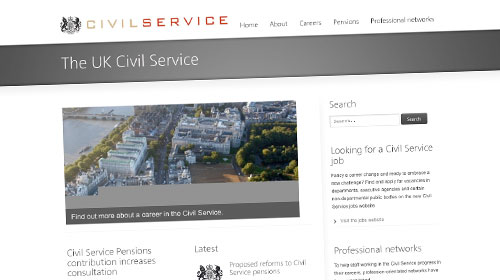 I’m grateful to the GDS blog for pointing out something I’d missed last week: the relaunch of the main Civil Service corporate website, on none other than WordPress… albeit as an interim measure.

the coincidence of impending changes to Civil Service recruitment processes and the end of the existing hosting contract for the site provided us an opportunity to revisit the site’s content, design and function. We needed to make sure that it is providing a stable, value for money interim option until it can be encompassed into the ongoing Single Government Domain project.

The site was produced by the in-house team within six weeks, helped in no small measure by their use of an off-the-shelf theme which ‘fitted what [they] needed with a little customisation.’ The theme in question is called Striking, offered for sale on ThemeForest for the princely sum of $40 (or just over £25).
The post helpfully includes their rationale for selecting WordPress:

We chose to use WordPress as it offers a simple, quick (with such a short development window) and flexible open source solution to a site primarily designed for publishing content. As such it is easy to use for a wide range of content editors and, of course, provides significant cost savings for maintenance and development.

I can’t tell you how nice it is to read that paragraph on a .gov.uk-domained site. The same site, of course, which earlier in the week defended its decision to code the new departmental publishing machine from scratch. But I promised to let that lie, didn’t I.
WordPress isn’t powering what is arguably the most meaningful Civil Service web content: jobs. That’s a separate platform, outsourced to someone called World Careers Network plc – ‘commissioned by the MOD and now led by HMRC’. There’s a link to their website on that jobs homepage, but you won’t see it:


It’s a rather dated-looking system, with a basic search facility based on a number of ‘select multiple’ form fields. It’s at its weakest when, as most people will do, you try to find a job near you. It offers an eclectic choice of 1688 city, town and village names, but not – as it happens – the respectably-sized town where I live. And there’s no intelligence to the geography: a search for jobs in Camberley just now gave me zero results, rather than recommending jobs it does have in nearby Sandhurst. There’s no facility to search by distance from a given postcode, and no map.

Add to that the apparent lack of an API, or RSS feeds, and it feels like something of a backwards step, compared to the optimism around the 2009 site. But it does offer email alerts, and the application process (end to end) can be done online.
Quick update: I’ve done some investigating re the former jobs API. It used to reside at api.civilservice.gov.uk – but that address isn’t responding. To mourn what we’ve lost, have a look back at Google’s cache.