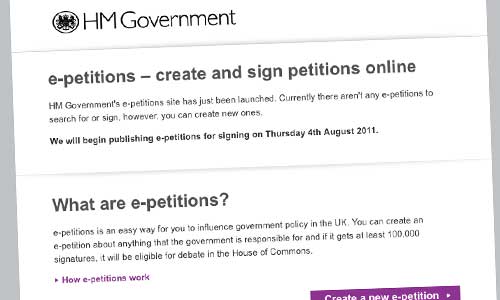 Two site launches today worth noting: the return of e-petitions, and the ‘new’ Government Digital Service blog.
E-petitions used to belong to Downing Street; now it’s moved over to Directgov, and thence to individual departments, rather than landing everything on the PM’s desk. There’s very little to see just now: just a submission form, and a few information pages. We won’t be able to see or ‘sign’ other people’s petitions for another week or so.
It’s been built by the Skunkworks team, now under the more full-time management of Mark O’Neill – or to be more specific:

#epetitions was put together by an onsite agile team of 3 devs, 1 PM, 1 customer + 1 part-time analyst, over three iterations. RoR stack.
– tweet by @chrismdp

… and so far, (update: nearly) everyone’s been jolly nice about it, particularly as there’s so little to see. Maybe they’ve seen what else is coming.
The e-petition’s previous incarnation became notorious when 1.8 million people signed to protest against road pricing proposals. Its successor won’t have to wait long to face a similar challenge: the Guido Fawkes blog has already lodged a petition calling for the restoration of the death penalty for child and cop killers, and is planning a special campaign to reach the magic 100,000 signature barrier, (potentially) triggering a debate in the Commons. Good luck to whoever’s desk that lands on.
One slight downer for me is that fact that it’s been redeveloped from scratch, using Ruby on Rails, rather than extending the existing MySociety-built platform (now being taken up by dozens of councils throughout the land). Tom Loosemore tells us: ‘ if [the new] code base isn’t open sourced, it won’t be for lack of will or encouragement!’ – but I just can’t see that being enough to see the application being reused more widely, particularly at local councils. Mark assures me that they did look at using WordPress, which would have guaranteed a high degree of reuse; I’m looking forward to reading his blog post about why they opted for the alternative approach. 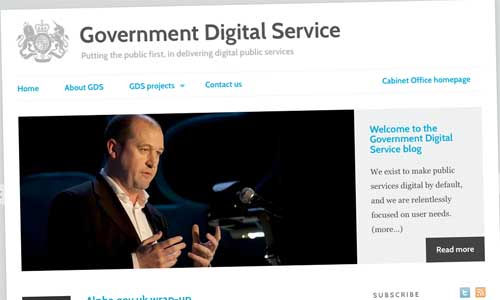 Speaking of which… the Government Digital Service has a ‘new’ blog, or rather, it has consolidated various previous efforts (including Alphagov and the Cabinet Office Digital Engagement blog) into a new home, located at wordpress.com (where it joins, among others, UKTI and both the Army and Navy).
They’re using the premium Linen theme, costing them $68, with a bit of graphic customisation; and a mapped domain for a further $17/year. And as it’s on wordpress.com, that’s pretty much all it’s cost them. (And purely because I’ve already been asked the question: no, I didn’t have any part in its creation. Well, apart from several years of ruthless evangelism.)
Meanwhile, with more than a little irony… the Cabinet Office has also published its list of the 444 government websites still in operation, 243 of which are marked for closure. Neither of these sites is mentioned.