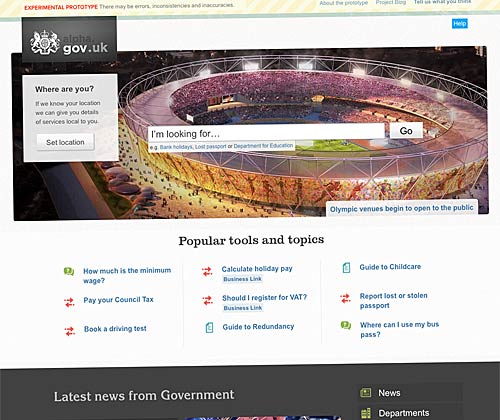 Late on Tuesday night, the password protection was lifted from http://alpha.gov.uk – and the most eagerly anticipated web project ever produced by government, arguably the only eagerly anticipated web project ever produced by government, was finally revealed. And it’s… well, it’s quite a shock to the system. Or rather, ‘The System’?
It’s important to recognise what Alphagov is, and what it isn’t. It is an illustration of how the ‘experts’ think government should present itself online. It is a pre-pre-release product: they aren’t just saying ‘you might find problems’, they’re more or less guaranteeing it. It is not a finished product – in terms of information content, browser compatibility, accessibility, etc etc. It isn’t a live site: much of the content is a snapshot in time. And it’s not a definitive blueprint of how things will be: it’s a challenge to the status quo. Some of it won’t be workable; some of it won’t be palatable. But it’s time to ask some difficult questions.
Rather than pronounce one way or the other, here’s my list of the ten things Alphagov – as a product, and as a project – has got right. (That doesn’t necessarily mean there’s a complementary list of 10 mistakes, by the way.)

So what happens next? It’ll be fascinating to watch. The geeks have thrown down their gauntlets. It’s time for the civil servants to consider how their information and services could fit into the new mould. And for the public to compare the Alphagov approach with the established Directgov/departmental model. Which is better? There’s only one way to find out.