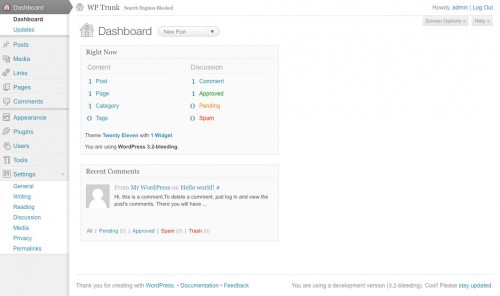 WordPress takes the ‘open’ in ‘open source’ very seriously: discussion of functionality and design changes happens in public, and it’s always possible to download and play around with the next version in its current form.
Development work on version 3.2 (set for release at the end of June) is approaching completion, with a couple of significant additions in the last day or so: namely, a bit of a design refresh on the admin side, and a new default theme – named Twenty Eleven, but actually it’s the Duster theme which was added to wordpress.com in February.
I’ve played around with the new admin design for a bit this morning, and there’s really not much to report. It’s instantly familiar, and everything’s in exactly the same place (more or less) – but it does feel just a little bit more modern, and I suppose it’s good to keep driving forwards.
But there’s an issue which government folks may need to note: this release marks a conscious step away from IE6 (on the back end).

We probably can’t drop much CSS, as IE7 shares a lot of the issues. This is mostly symbolic, and reduces the platform combos we need to test. This also means any security issues that are shown to only affect IE6 only can be lowered in priority.
– Mark Jaquith, March 2011

This won’t affect what IE6 users see on the front end, as that’s dictated by the theme rather than WordPress itself. And it doesn’t mean the admin side will instantly become unusable in IE6. But the security warning alone should be enough to force remaining stragglers to upgrade.

Oh – and one more thing. There’s a really beautiful new ‘distraction free’ authoring view in 3.2. In WordPress currently, there’s an icon on the toolbar which looks like a blue monitor screen. When you press it, the text-editing box goes ‘full screen’, with a row of buttons along the top… just like Word. Well, 3.2 takes that a few steps further, and it’s gorgeous.

4 thoughts on “New look for WordPress admin side: bad news for IE6 users”