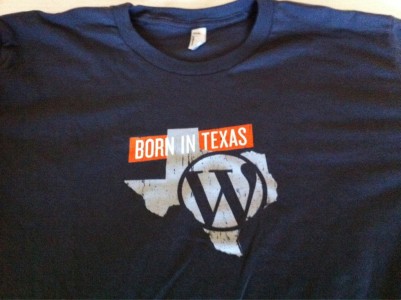 The Automattic gang have produced special t-shirts for the SXSW festival, declaring WordPress’s birthplace to be the festival’s host state of Texas. Which is nice, except that it’s not entirely accurate.
As regular readers will know, the WordPress project was started by two people: Matt Mullenweg and our own Mike Little. And whilst Matt may have been in Texas when they first discussed starting something, Mike was in Stockport, greater Manchester, England. (In his kitchen, as far as he could recall.) In fact, since it was Mike who said:

If you’re serious about forking b2 I would be interested in contributing.

… I’m saying it was all Mike’s idea. 🙂
Of course, as Matt says in his acknowledgement of Mike’s clarification, it’s all a bit meaningless anyway. But I can’t help feeling it points to something deeper: the UK’s – or Europe’s? – inferiority complex when it comes to tech and innovation. We’re pretty good at this stuff over here too, you know.