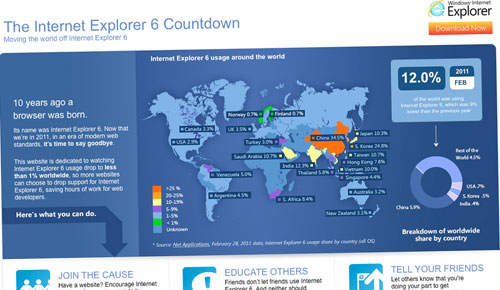 Internet Explorer v6 is the bane of any web developer’s life. You can build a web page, and it’ll look beautiful in every other browser – but then you look at it in IE6, and it’s a mess. Without getting too technical, IE6 interprets the web’s CSS design code in ways which are irrational, unexpected, illogical and sometimes just plain wrong. If it could simply be wiped off the face of the internet, the web developer’s job would be much easier – and frankly, projects would be cheaper, and prettier too.
Microsoft has never made a secret of its desire to move people to more recent versions; but now, with IE6 approaching its tenth birthday – although strictly its birthday isn’t until late August – and IE9’s release imminent, they’ve started a proactive campaign to shame people into upgrading. IE6Countdown.com displays a map showing percentage market share for IE6 worldwide; and invites you to join its campaign ‘to get Internet Explorer 6 to 1%.’ In all likelihood, Microsoft is seeing this as an opportunity to sell upgrades to Windows 7 – but that doesn’t undermine the validity of the message.
I know some of the straggling government departments have finally upgraded in recent months; so, it’s over to you, gang. Which departments are still on IE6… despite Microsoft’s own advice, and indeed, the advice of government’s own IT security campaign?