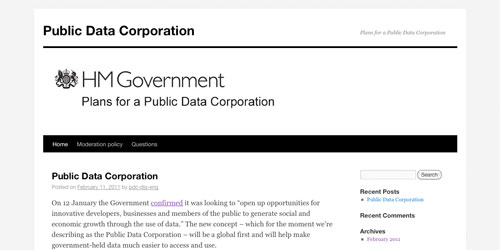 Has somebody at the Cabinet Office just discovered WordPress, or something? I see they’ve also just launched a WP-based site to consult on the proposed Public Data Corporation. This time, the site is running in the most vanilla, out-of-the-box configuration imaginable – using the TwentyTen theme, and without even tinkering with the sidebar widgets (albeit with the addition of Disqus for comments). It’s hosted at MediaTemple… despite the fact that the Office has its own hosting capability at Amazon, as demonstrated by today’s Public Bill Stage pilot.

One thought on “Another Cabinet Office WP consultation”