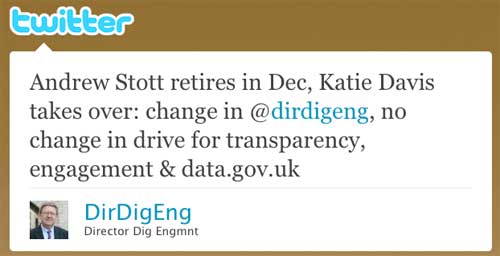 Appropriately enough, Andrew Stott has announced his retirement from the position of Director of Digital Engagement via Twitter.

He’ll be leaving in December, to be replaced* by Katie Davis – who recently returned to the Cabinet Office following a three-year stint as Executive Director of Strategy for the Identity and Passport Service. In her previous period with the Cabinet Office, she was Director of the Government IT Profession.
* Update: interestingly, Kable reckon she’s taking over on an interim basis only.
I’ve never come across her personally; but looking at her background, it all seems to be in ‘big IT’ rather than the smaller, more agile stuff that you might associate with the digital engagement role.
For reference, I captured the role’s job description here. Stott will be leaving the position after only 18 months, so we can’t really assess whether he met the objective of seeing that ‘the use of world class digital engagement techniques should be embedded in the normal work of Government’ within two years.