The BBC published a very nicely balanced, sober article yesterday by Brian Wheeler, noting the ‘web revolution sweeping Whitehall‘. It’s been widely retweeted around the e-gov community, and is being seen as highly complimentary of civil service efficiency.
Which makes it all the more curious to see the pictures they’ve chosen to illustrate the story: and the presumably humorous captions added beneath them. 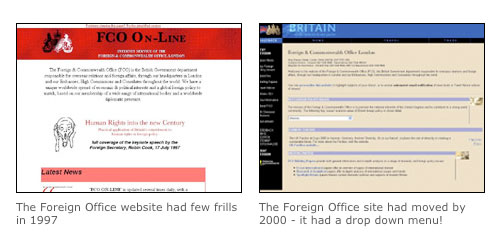 As you may or may not know, I was the individual responsible for the FCO web presence during those formative years. I designed and built every page of the 1997 site with my own two hands; and led the development of the 2000 (actually, 1998) site. And I’m going to defend them.
The 97 site was redesigned, top to bottom, during purdah… and launched on the morning after the election. Never mind ‘few frills’: its design was pretty close to cutting edge at the time. That image of Munch’s The Scream was actually an animated GIF, which morphed into a globe – OK, maybe that was a bit pretentious on reflection. We even had RealAudio clips of Robin Cook’s comments on arrival at King Charles Street, thanks very much. Grr.
The 98 site had a hell of a lot more than ‘a dropdown menu!’ (sic). In fact, it was absolutely groundbreaking, internationally speaking: and it had more functionality than the majority of Whitehall departments’ sites have now. Actually, if it launched now, it would still be one of the top handful.
You could register to receive email alerts, based on news items ‘tagged’ with certain policy areas, or updates to country Travel Advice notices. And the list of latest news on the homepage was then personalised according to those same preferences: so you’d instantly see news items of interest to you, and a chronological list of changes to country Travel Advice for countries you cared about.
On the back end, it was the first in government to use a web-based content management system – a custom-built thing, courtesy of a truly heroic developer called Ian Lathwell at Bates Interactive (later  known as XM London). And if you’re not impressed by that, maybe I should tell you about the several large Whitehall departments which still – a dozen years later! – haven’t evolved that far. We had a simplified markup language – […] for bold, {…} for italic – which was flexible enough for our purposes, and yet simple enough to explain to those who had never seen the web. Nothing too extravagant, but it just worked. We won enough awards to justify a trophy cabinet.
And you won’t believe how little we paid for it. Buy me a coffee and I’ll tell you.
So, less of the smart-alec captions, Mr/Mrs/Miss BBC Production Assistant. Thank you.

4 thoughts on “Oi BBC, don't you dare diss my legacy”