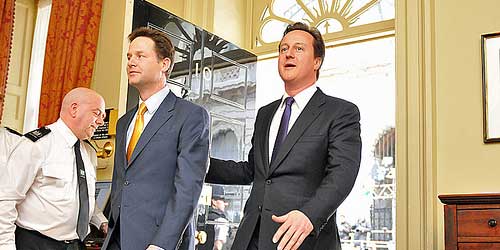 I make it seven members of the new Coalition cabinet with Twitter accounts: although of course, some have been more personal than others:

It’s worth noting that only Hague and Pickles have been active since polling day; and judging by one recent tweet, Pickles seems intent on maintaining pre-poll levels of activity. I wonder how many others will restart… has Twitter served its purpose, now they’ve been re-elected?
We also have a few bloggers:

Some of the senior Tories have made frequent contributions to the Conservatives.com site’s Blue Blog – among them David Cameron and Eric Pickles.
The case of Sir George Young is worthy of special mention: his ‘on a lighter note’ writing goes back as far as 1999. And whilst it wouldn’t really meet the definition of a ‘blog’ – no feed, no commenting, etc – he surely deserves some credit for getting started so early. And indeed, for publishing his full constituency diary, ribbon-cutting by ribbon-cutting!
Update: Although not strictly Cabinet, it’s also worth noting reports that the Conservatives’ head of press, Henry Macrory is to take ‘the same role at Downing Street’ (although his Twitter biog hasn’t yet been updated). Henry has been a prolific tweeter, and as you might expect from someone in his position, they’ve usually been rather partisan in nature. Can’t quite see that continuing somehow, especially not the anti-Clegg stuff.