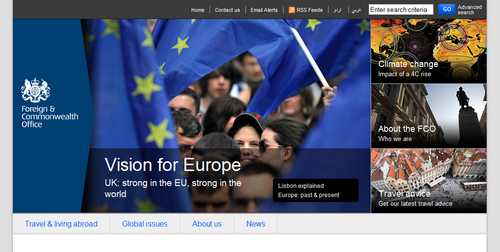 The Foreign Office relaunched its corporate website over the weekend – always a brave move. You’re met by a very striking news-y homepage, with large-format high-impact (and high maintenance) imagery: it works very well indeed, but is the sort of homepage which takes a lot of editorial effort, and presumably a photo budget of some sort. There are several RSS icons dotted around the place; blog and Twitter areas on the homepage; and if you dig a little deeper, a press office blog (of sorts). It’s a homepage which clearly knows its purpose. And that’s a good thing.
Design-wise, the header feels modest and contemporary. But I’d have concerns about the presentation of text lower down the page. Whilst I’m sure a lot of the issues – inconsistent spacing, curious alignment, empty links – can probably be put down to teething troubles, I’m forced to look back to the Blogs site which started fairly messy, and hasn’t ever improved. Stephen Hale promises a new look to that site too; I sincerely hope so.
The press office ‘blog’ is a very interesting addition: running since June, it actually uses an account at Tumblr.com as its CMS, with the material being pulled into FCO chrome (presumably) via RSS feed. It’s publish-only, so no comments; and if you want anything beyond the last few items, it sends you off to Tumblr. Now don’t get me wrong, there’s lots to like about Tumblr, a lighter-than-lightweight ‘blogging’ solution. But I don’t feel comfortable about a major department of state using it. And I wonder if they’d be doing that if their main blogging platform wasn’t a better one.
You’ll be wondering about cost, no doubt. ‘None of this work cost any extra money,’ says Stephen, ‘we’ve done it in house.’ And whilst that doesn’t mean it’s free, at least it means (one assumes) they’ve avoided the worst excesses of some previous site rebuilds.
Is it better than what went before? Yes, I think so. It feels like a much smaller, slightly better organised site. But as I said last time, we expect a lot from FCO – with a famously digitally-savvy Foreign Secretary, a communications remit and a significant budget. I still think they can do more, and do it better. We await their new appointment with interest.