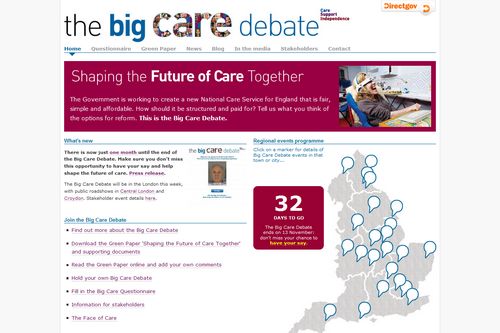 One of my bigger projects this year has been the website for the Care And Support green paper, aka The Big Care Debate. Basically, the country is in desperate need of a new funding model for long-term care of the elderly and disabled: and in July, three funding options were put forward for consideration. And we’ve been trying various things, online and offline, to engage people in the debate.
When the green paper was published, we did a Commentariat-style ‘commentable document’; there’s also an interactive on-screen questionnaire, with or without a ‘face morphing’ app which shows what you might look like when you’re old. (I can’t claim any credit for that last element btw.) Meanwhile, in the real world, there have been a series of ‘roadshows’ for public and stakeholders – as shown on the clickable homepage map. You’ll also note, if you click on places like Peterborough, Derby or Coventry, that the team have taken a digital camera with them, and are posting snaps on Flickr. Then there’s the Campaign Monitor email list, the Twitter account, the Facebook activity (official and unofficial)…
The response has been huge, and often angry. The site has received more than 3,500 user comments, the majority of which have been to a single page of the commentable document: there’s clearly been a concerted campaign among interest groups to make their opposition known. There’s also been a healthy volume of comments on the campaign’s blog, written – you’ll note – in the name of the lead official, rather than a politician (although that hasn’t stopped people constantly raising the issue of politicians’ expenses claims).
In truth, on occasions, it’s been too much. At one point, we feared the site had been hacked: in fact, we’d just hit the limit imposed by our hosting company on outgoing emails. (Turned out, it was too many people asking to receive email notification of follow-up comments.) If you don’t count Downing Street petitions, it must rank as one of the highest volumes of responses to a government consultation exercise.
Now let’s be honest: most of the feedback has not been complimentary. There are a lot of people who think the changes are designed to cut their current benefits; and anything the Government tries to do at the moment is being met with disillusionment, cynicism and antipathy. So is it a bad thing to have received so many defensive, angry, confrontational comments? Personally, I don’t think so. Negative feedback is still valid feedback. It highlights the areas where there have been problems, if only communication problems. And it gives you a mailing list of people you need to contact, to make your case.
We’re now into the final month of the consultation, which – for some people, I dare say – is a relief. By any volume metric, I’m confident the process will be counted a success. But of course, the only meaningful measure of success is whether or not it yields a workable proposal with general public approval. In the current political climate, I fear that may be too much to ask. Still, I hope the web element has done its bit.