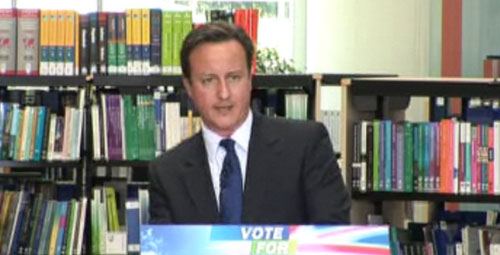 The explicit references to the internet in David Cameron’s big speech on ‘fixing broken politics’ this morning don’t come until the end. All MPs’ expenses to be published online; the same will go for ‘all other public servants earning over £150,000’. An Obama-esque pledge to put all national spending over £25,000 online. A commitment to ‘publish all Parliamentary information online in an open-source format’ (whatever that means). An end to the ‘ridiculous ban on parliamentary proceedings being uploaded to YouTube’. All good, on the face of it.
But the underlying message throughout the speech, empowerment of the individual, is really only a reflection of the changes being brought about by the internet revolution. We expect to be able to do things now, in our daily lives, which seemed like science-fiction only a few years ago. It’s really not that long ago that ’28 days for delivery’ was a standard; now we get fidgety if our delivery isn’t here within 2 or 3 days. Your mobile phone has instant access to every fact in the world, within seconds.
So Cameron’s talk of ‘giving people the power to work collectively with their peers to solve common problems’ isn’t really the articulation of a great vision: it’s a reflection of a reality that’s already with (many of) us. Likewise, transparency isn’t really something within his gift. ‘At the length, truth will out,’ Shakespeare wrote as far back as 1600; it’s just that these days, it gets out a heck of a lot quicker.
Having said all that, there are some parts of the speech which make me feel a little uncomfortable. I find it difficult to hear an Old Etonian and Oxbridge-graduate speaking up for ordinary people feeling ‘deprived of opportunities to shape the world around them, and at the mercy of powerful elites that preside over them’. And similarly, when he says ‘we rage at our political system because we feel it is self-serving’, I find my eyebrows raising at the use of the word ‘we’. (A bit like when Five Live presenters talk about ‘the media’ in the third person.)
But the reality is, this is the man who currently seems most likely to be running the country in a year’s time. The power will be in his hands. And whether he’s doing it by choice, or just recognising the way the wind is blowing, he’s talking about diluting that power, boosting transparency, and embracing the web. We like.