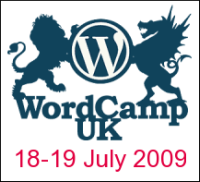 Tickets have just gone on sale for this year’s second WordCamp UK. And if the promise of hearing me banging on about WordPress isn’t quite enough to tempt you to spend a July weekend in Cardiff, here’s some news that might swing it: Matt Mullenweg, basically ‘Mr WordPress’, is coming too.
I’m also proud to confirm that, although we haven’t finalised the details yet, Puffbox will again be sponsoring the event… and for the very same reasons as I described last year. Many good contacts were made in Birmingham: in my own case, some of this year’s more exciting and ambitious projects simply wouldn’t have happened, had I not met certain people last July. I’m better at what I do, as a direct result, and the company proposition is  lot stronger too. It’s a chance to say thank you… and to make sure that the event definitely happens, for my own potential benefit… and others’ too.
I’ll almost certainly be leading a session on the progress of WordPress in central government: I’ve got one or two interesting projects to talk about, and I’m sure I’ll touch on these, but it’s probably more interesting for more people if I give a cross-government overview. And I think I might have volunteered to take the opening ‘icebreaker’ session.
Tickets for the event are £25 until the end of May – and with Matt Mullenweg confirmed as attending, it might be wise to snap yours up swiftly. For those who want to give a little something back to the community, there’s also a ‘microsponsor’ option where you can choose to pay nearly three times face value, to attend exactly the same event. (It’s proving quite a popular option, for the record.)