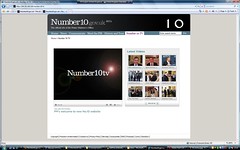 Thursday’s Daily Mail picks up on the imminent launch of the new Downing Street website, and chooses to focus on the ‘Number10TV’ video element, to be powered by Brightcove. But for once, it’s a story driven more by its scepticism about new technology than its dislike of the current government.
They wrongly call it ‘the latest effort to boost his flagging poll ratings’ (as it’s a Civil Service initiative), but correct themselves later in the same piece, referring to it as ‘a fresh political effort to exploit the potential of the internet to reach voters directly’. And indeed, they do quote No10’s attempt to put some perspective on it: ‘Downing Street last night played down the significance of the new channel, saying: ‘We’re always looking at ways of improving and strengthening the website.”
But it’s the sniffy tone regarding everything from Webcameron to the @DowningStreet Twitter account which is most striking. A lot has happened on Webcameron since the initial clip of Dave doing the dishes, although it’s gone a bit quiet lately; and I’d have to disagree with the assertion (relatively speaking, anyway) that the Twitter activity ‘has so far failed to arouse great enthusiasm’.
Despite their Damascene conversion to the web, driven principally by celebrity drivel, it seems the Mail’s heart really isn’t in this modern stuff after all. (There’s a remarkably similar story in the FT, by the way, but with slightly less cynicism.)