Time to unleash another Puffbox production for 10 Downing Street. Gordon Brown’s off to Brussels to chat about this and that (mostly that, I guess), and as with the trip to the US in April, they’ve sent a member of the No10 web team to report on proceedings. I’ve been working with them to develop a blogging platform, based very much on the April site, but with a bit of Friendfeed-inspired feed aggregation. 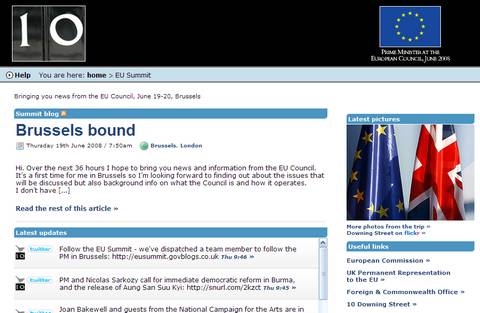 The site, at eusummit.govblogs.co.uk (for reasons which will soon become apparent), is based primarily around a WordPress blog – but also attempts to bring together No10’s other activity on sites such as Flickr, YouTube and Twitter. Plus, with David Miliband also attending, we’re ready to integrate any articles he publishes on his own blog.
The plan is to try and get as much video content as possible, to give a flavour of how the European Council actually works on the ground. But as ‘Your No10 Correspondent’ acknowledges, we just don’t know what he’ll be able to get.
Once again, it was an aggressive development schedule – measured in hours rather than days! – and I’ve had to use some cheeky work-arounds. (Accessing and filtering the Foreign Office’s blog content was especially tricky, for reasons I won’t bore you with.) But I hope it’s another example of how a few RSS feeds, a bit of PHP code, and a little lateral thinking can tie up these various best-of-breed tools and services into a single coherent website.

2 thoughts on “No10 blogging from Brussels summit”