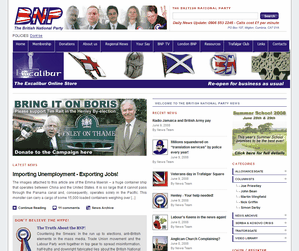 Late last year, I noted that the British National Party’s website was (by some degree) the most popular among UK political parties – and got dissed by the Telegraph for not linking to it. I wrote at the time that the site wasn’t exactly up to much, and I don’t have reason to visit it regularly. But, in the process of gathering some data on parties’ online activity, I dropped by yesterday… and got quite a shock.
At the start of the year, the BNP relaunched its website. ‘Making the maximum use of the Internet has always been a priority for the BNP because the Party is censored and so misrepresented by the establishment media,’ said an article in their newsletter, Freedom. (Well, yeah, OK, carry on.) ‘The updated website helps fulfil this ambition with the sites new web pages matching and even bettering the traditional news and politics outlets.’ You know what? They’re not entirely exaggerating.
The new site is based on WordPress, and is managing to turn over half a dozen stories daily: a combination of news items and columnists’ contributions, all attracting decent numbers of reader comments, with sharing buttons included. They’re using a well-established, off-the-shelf theme (The Morning After), with a bit of (less than subtle) customisation. The overall effect is very slick, very professional… and yes, their claim about ‘matching and bettering’ probably does stand up.
There’s a wider lesson here. Blogging – by politicians, activists, journalists and amateurs – is now an established part of politics. I know of at least one major government website which is about to relaunch itself in a blog format; now here’s the first political party site to throw itself properly into that game. I dare say it won’t be the last.
PS: The theme they’re using? Designed by an Indian chap. 🙂