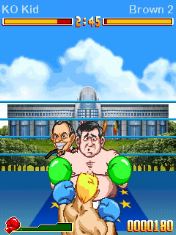 I blame the Tories. They brought us ‘A Kick in the Balls‘, an attempt to make political capital from some (apparently) frank exchanges round the Cabinet table, with a Flash beat-em-up game aimed squarely at the viral market. Tekken it wasn’t. (In fact, playable it wasn’t.)
Now, remarkably, we have Super Political Boxing for your mobile phone. It’s a reworking of a previous apolitical sports game by mobile specialists Glu, which goes for cartoon-style fun along the lines of the classic Punch Out, more than the simulation of EA Sports’s Knockout Kings / Fight Night series.
It’s your chance to vent your anger against such world leaders as Bush, Berlusconi, Putin, a remarkably beefy Angela Merkel, and our own Mr Brown (with a guest appearance by his predecessor). It’s far from the most sophisticated mobile phone game I’ve ever played, but I’m partial to the occasional boxing game. The graphics are well done, it’s actually playable as a game, and it’s a laugh. Which, I guess, is all it was ever trying to be.

2 thoughts on “Re-engaging the public through violence”