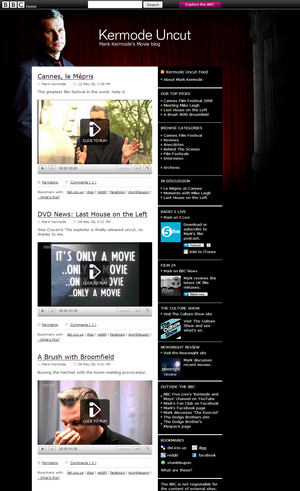 I’ve always been a big fan of Mark Kermode, movie critic, broadcaster and visiting fellow at the University of Southampton. Prior to podcasting, I would schedule my Fridays to allow me to hear his Five Live segments with Simon Mayo. And yet curiously, I’m not really a movie fan (although I sometimes think I could have been). And besides, I’m now the devoted parent of a toddler. Cinemas are off my agenda for the foreseeable.
Kermode has one thing in his favour: passion. He really cares about movies, and he’s quite prepared to show it. It’s almost as if that passion is what attracts me, more than the subject matter. It’s the same with Clarkson & co on Top Gear. Since last summer’s floods I no longer own a car, and I don’t get especially excited by them. But Top Gear is must-see TV. (Indeed, as my wife puts it, she loves Top Gear apart from the car bits. That kinda sums it up.)
So it’s great to see Kermode being the subject of the BBC’s latest blogging project – and, if I’m not mistaken, their first true ‘video blog’. And yes, guess what, it’s great stuff.
Let’s look at the mechanics of it. The ‘entries’ use the BBC’s embedded video player (which finally works on my system!)… and look terrific in full-screen. They’re limited to 2 minutes, ish… and they’re mostly a fixed camera pointing at his head and shoulders, with the occasional still image or trailer excerpt dropped in for variety. No clever production, no smart-arse video effects, no background muzak. Frankly, nothing you couldn’t do yourself with a dead cheap camera, probably even a half-decent phone, and a YouTube account.
Why does it work? It’s all down to Kermode himself, once again. A warm and engaging personality, a thorough knowledge of his subject, a sense of what makes a good anecdote. He’s clearly comfortable in front of a mic or camera; he goes in knowing what he’s going to say, but doesn’t seem to be reciting a half-memorised script – or worst of all, reading off an autocue. But mostly it’s his passion, genuine passion. His opinion on what constitutes a good film (almost) doesn’t matter.
This is the first example I’ve seen of a ‘mainstream’ videoblog which really works (although as Dan Taylor points out, you can arguably trace it back to BBC2’s Video Nation); and it shows the power of video in personal engagement.
There’s unquestionably a role for this in government and politics, giving MPs, ministers and candidates an opportunity to demonstrate the genuine passion they have for what they (want to) do (in theory). And this is the model they should aim to follow.