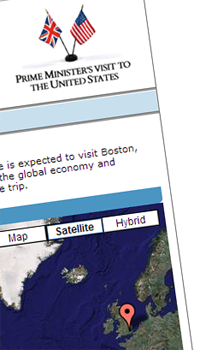 I hinted that there might be more online initiatives coming out of 10 Downing Street; and true enough, next out the world-famous door is a bit of on-the-spot blogging from Gordon Brown’s trip to the United States later this week.
For the first time on a foreign visit, a member of the No10 web team is joining the PM’s entourage, armed with a laptop, a camera, a fresh WordPress installation back at base, and the passwords to the Flickr and Twitter accounts. And as Downing Street announced last week, we’re mashing it all together into a ‘live’ microsite.
The plan is to cover the set-piece events – speeches, press conferences, etc – via Twitter flashes, to be followed up with a longer, more considered blog post. Pictures will be posted on Flickr, most likely a combination of agency-sourced images and snaps from our man on the spot. And it’ll all be pulled together by the power of RSS, into the custom WordPress theme I’ve built.
When a journalist does this, it’s considered cutting-edge. But when the tables are turned, and the civil servants start doing it too? Let’s see.
My favourite element is the plotting of stories on a Google Map planted on the homepage. Granted, it’s fairly crude: articles written in Washington will be assigned a WordPress category ‘washington’, then when you click on the Google Map pushpin over Washington, you’ll see the appropriate archive listing. We aren’t talking GPS coordinates or anything. But I don’t think I’ve ever seen anyone try doing it… and it works. 🙂
As with the Progressive Governance summit website, it’s experimental. We’re hoping to bring a new first-person perspective to things, but naturally it can’t be too personal: striking an appropriate balance could prove tricky. We’re banking on internet access being readily available; and it may or may not be practical for one person, with limited hands-on experience, to do all these things. But hey, there’s only one way to find out.
The fun starts late on Tuesday, or early on Wednesday, depending where you are. Please have a look, and tell us what you think.

6 thoughts on “On tour with the PM”