Looks like something interesting coming out of Cowley Street: ‘For the next election the Liberal Democrats will produce a web-based interactive manifesto, which will use audio-visual communications as its centrepiece rather than the written word.’ Makes a lot of sense… I mean, did you ever read a printed manifesto? It’s party members only, but a quick glance at the source code shows it’s been done in WordPress 2.0.5, so you know what to expect. 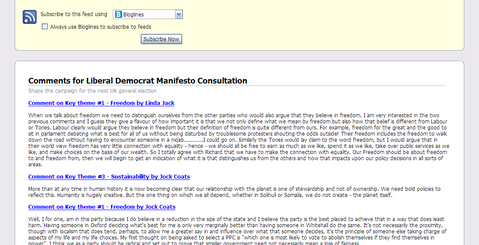 I notice, though, that there’s a bit of a security hole in it? You aren’t meant to be able to get in unless you’re a party member, but it’s possible to see the latest postings and comments via the automatically-generated RSS feeds, which are currently unsecured. You can only see the first few words of each posting, but the comments are shown in full.