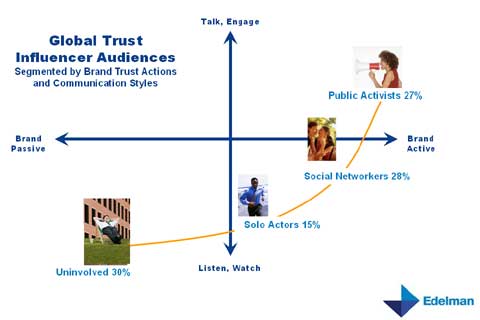 PR agency Edelman published its annual global Trust Barometer survey this morning, and as ever, it’s fascinating reading. British interviewees have lost faith in pretty much everything since last year, with government’s score dropping by half, falling below the media’s trust rating. We trust business more than we trust NGOs, a reversal of last year’s positions, although both fall markedly.
Technology is the most trusted industry sector worldwide, with healthcare and biotech coming second and third in Europe. Intriguingly, banks score relatively well for the US, China and India – but very poorly in Europe and Japan. The media business comes bottom, more or less across the board.
Swedish and Canadian firms are rated the most trustworthy overall, with Russian companies the most distrusted by pretty much everyone. American firms continue to rate relatively poorly in Europe, with Brits being most negative of all – yet Swedish and British-based companies are considered more trustworthy by Americans than their own!
It’s all summed up by David Brian, Edelman’s top man in Europe:

The growing trust in ‘people like me’ and average employees means that companies must design their communications as much on the horizontal or the peer-to-peer axis as on the vertical or top-down axis. CEOs should continue to talk with elites, such as investors and regulators, but also provide critical information to employees and enthusiastic consumers who spur the peer-to-peer discussion. Third parties with credentials, like academics and physicians, are also critical.

A flick through the presentation slides is highly recommended.