I’m amazed how much coverage is being given in the mainstream media to tomorrow’s big speech by Apple boss Steve Jobs (5pm UK time). We’re at the point now where, if he doesn’t announce a new mobile phone touched by the hand of Jonathan Ive, the world has a crisis on its hands. 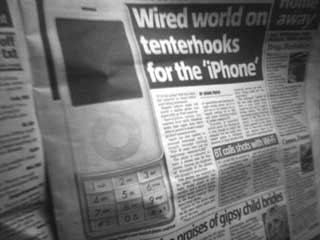 I’m not a huge Apple fan, but I do admire their ability to – generally – just get it right. The evidence is there: my iPod Nano can sync data from Outlook, although I don’t really have any need for it to do so. There’s a very real chance that I’ll be getting my credit card out tomorrow evening. I’m just bored of my current Windows-powered mobile phone(s)… it’s a pain being forced to use Outlook, when online solutions like Google Calendar or 30boxes would be much better for me.
Incidentally… coolest thing I’ve seen in a while is the 30boxes view of your Flickr photos (and other dated content). Try this.