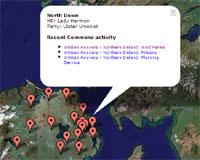 I’ve been experimenting a bit more with Ajax, XML and all that good stuff… and have come up with a Google Map of all UK MPs. Each constituency is shown as a marker on the map, grouped by the usual UK government regions to make it a bit more manageable. Click on a marker, and you’ll get the usual Google popup window, telling you who the MP is, which party they’re from… and what they’ve been up to recently. Technically, it’s much the same as last week’s football news mashup. The coordinates for each marker are stored locally in XML files, and all the data is brought in dynamically via ajax (as XML or RSS) when the marker is clicked.
The magic ingredient is the use of the web services API offered by TheyWorkForYou. If you’ve never seen the site before, it takes the official record of proceedings in the House of Commons (Hansard) and turns it from this into this. That’s clever enough in itself, but they go one step further – by offering much of the information for consumption by other websites, in the form of data feeds (including XML). What this means, in practice, is that my humble little map doesn’t know who the individual MP is… but it knows how to ask TheyWorkForYou, and how to process the response. Think of it as cross-site content management: writing once, using many times, even on different websites.
With more than a decade of e-government experience behind me, the recurring thought in my mind is: I’ve thrown this together in a matter of a couple of days. How long would it have taken, how many levels of management would I have had to sweet-talk, and how much would it have cost, to do this inside the public sector? And deep down, I know the answer is that more likely than not, it simply couldn’t happen.
Depressingly, I’m wondering if e-government should throw in the towel, and shift its focus from producing websites to producing web services. In other words, create databases visible to the outside world, and let others do the presentation. Lots of tailored front-ends for different audiences and different uses, all running off the same authoritative data source. I bet we would end up with a better appreciation for the data, and better application of it… which, ultimately, meets government’s objective.

6 thoughts on “My latest mashup: on Westminster and web services”