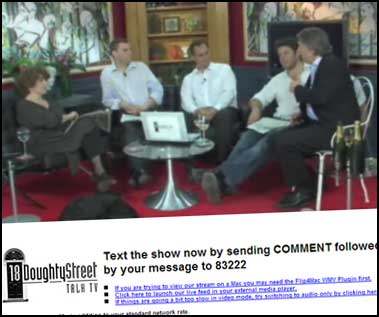 Being honest, there are plenty of reasons to find fault with 18 Doughty Street on its opening night. I’m watching the late-night discussion show as I type, and it’s taking them quite some time to get everyone mic’ed up properly. The 18DS website isn’t what you’d call slick, with too many dead ends for my liking – and having taken the trouble to register for an account on it, I can’t immediately see what benefits it opened up. I’m ‘losing the signal’ a little too frequently for my liking. If this was real telly, the production team could expect a right kicking.
But credit where credit is due: it’s there, and let’s not lose sight of the achievement that represents. We now have a daily ‘TV channel’ featuring credible people you’ve heard of (if you’re into your politics), broadcasting via the internet to the broadbanded masses. Opening night featured a lengthy interview with a major world leader (Aussie PM John Howard), and a couple of hours of live output hosted by Britain’s leading political blogger, Iain Dale. This is a big deal.
I hope they don’t consider the term ‘amateur’ to be an insult; I use the term in its purest sense. You can sense the excitement and passion for politics coming through what they’re doing. The output is rough around the edges… but maybe that’s no bad thing. They clearly aren’t doing this to win any TV production awards. They’re doing it for the love of doing it. And good on them.
If anyone’s interested in the technicals: they’re broadcasting at 320Kbps in WMV format, with a (widescreen) 320×180 picture expanded 2x to fill a branded popup window.