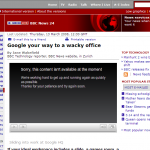 Steve Herrman, writing on the BBC’s Editors blog, is absolutely right: the move to video embedded on the page is ‘quite a significant moment’ for the Beeb’s website. Except that, judging by the first visible example, it’s got issues. It’s either failing to buffer, or returning an error message.
As explained in more detail on the Internet blog, the move to Flash video means faster processing for them, better quality for international users, and better usability for everyone. Clips will all have their own ‘permalink’ pages on the site, which makes for easier linking – but if you’re thinking of embedding clips on your own site, you’ll be disappointed.
It’s a welcome improvement from the Beeb: the News site’s use of video was starting to look ridiculously dated, when compared to the iPlayer… or indeed, to competitors like Sky, who went down this route almost a year ago. But I think Sky still has the edge in terms of usability. The Beeb’s pages already feel too long to me; I doubt many people ever read to the bottom of a story. By embedding video at the top of the page, as they seem to be doing, it pushes the text content even further down. Sky’s ‘rich sidebar’ treatment gives the best of both worlds.