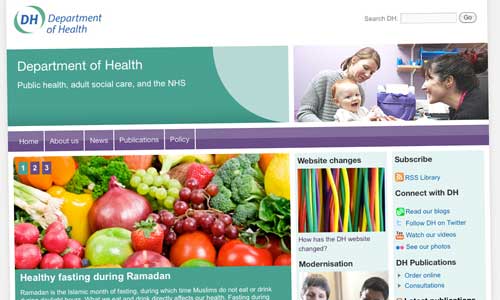 Congratulations to Stephen Hale and the team at DH for finally making the leap, and moving their corporate web presence over to WordPress.
Stephen hinted at such a move back in February, when he blogged about their successful use of WP for a number of subsites: ‘having dipped a toe in,’ he wrote, ‘it’s tempting to go a bit further than we originally planned.’ Clearly though, Stephen’s plans have moved on quite a bit since the start of the year: in a blog post last week, he described this as ‘phase 2 of 4’ (!).
As with our work for Defra, they’ve opted not to redesign the site: it still looks (broadly) the same as it did, although not identical, and the trained eye will spot a more WordPress-friendly approach to sidebars and things. Nor have they migrated most of the old content: it will remain accessible until it’s out of date, at which point it’ll be moved to an (unspecified) archive. I don’t think anyone would call that a perfect solution, but these are cash-strapped times, and it’s almost certainly good enough.
The project – driven by Steph Gray, including some input from Mike Little – is based on HealthPress, the same TwentyTen-based child theme Steph developed for those aforementioned subsites. Back in February, I wrote that the code ‘isn’t pushing the technology’s boundaries too hard’ – and really, that’s still the case. But I stress, I don’t write that as a criticism. It’s to Steph’s great credit, and that of WordPress itself of course, that he’s made the site work with just a vanilla WP instance. Amazing what you can do with posts & pages, tags & categories, a bunch of widgets, and a few ‘usual suspect’ plugins.
Stephen very kindly referenced the Word Up Whitehall event from last October as having provided ‘a moment of epiphany’: if there’s a direct line to be drawn from there to here, then I’m absolutely delighted my little get-together served its purpose. Maybe it’s time for a follow-up.
That’s now four Whitehall departments running their primary websites on WordPress: Transport, Health, Defra and the Wales Office; plus Downing Street, of course, and several – Cabinet Office, BIS, DFID, DECC – using it for secondary elements of their corporate websites.
So does that make it the most used ‘CMS’ for Whitehall departments’ primary sites? I rather think it might. 😀